Paul Soloway would be proud to know that his name is now attached to the most prestigious masterpoint award, the Player of the Year (which Paul won in 1998).

Every year, there are 3 major North American Championship tournaments. The player who wins the most "Platinum Points" at these events is the player of the year, now the "Paul Soloway Player of the Year." 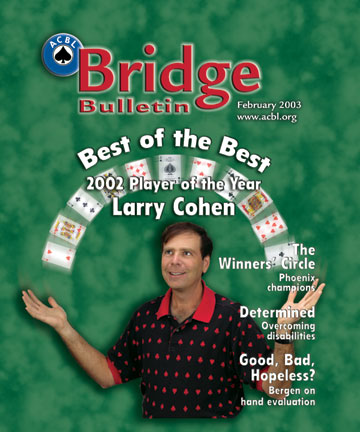 I'm so proud of winning this award in 2002 that I use it in my logo and all my newsletters! I would be honored to win it again some year, especially with Paul's name now attached.

By looking at the list of performance this year, you can determine who the best players really are. All the top names in bridge are on this list. Taking it a step further, you can see who has performed best at the nationals for the entire decade.

Here are the links to these lists: