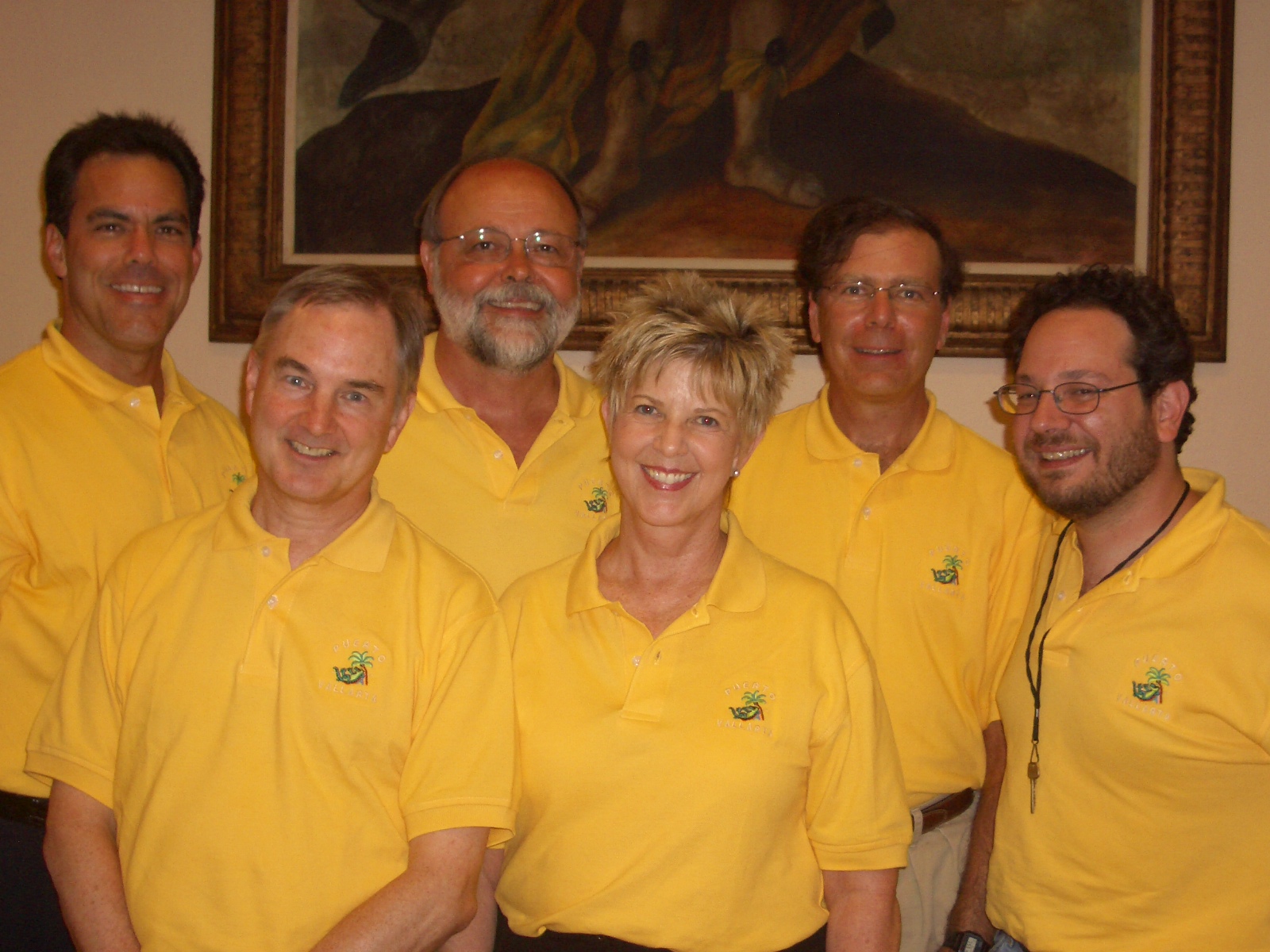 I recently played in a regional in Puerto Vallarta, Mexico. It was a most enjoyable tournament, fun town, good hotel and mostly nice people. The only complaint I heard was from one couple that was frustrated that they had to play against me! Those of you who know me personally, realize that I am always kind at the table, and would never be an unfriendly opponent. I don't bite. Yet, I was told that it was "unfair" and not right that they should have to come to a bridge tournament and face a "top player" such as me. Okay, so now  I actually will be a little nasty. Why must this attitude exist? I would give anything to play a round of golf against Tiger Woods. Sure, he'd slaughter me, but so what? What's the big deal if someone plays just one measly match (or sometimes it might even be only 2 boards of a pair game) against a top player? So what if they get a bad result? Shouldn't this be a privilege? Wouldn't it be fun if they actually beat the expert(s)? Isn't that the way to get better? I just don't understand.

Now, on to some bridge. Early in the tournament, I faced a most unusual situation late in the bidding. My partner opened one heart and I held:

I think this hand is too good for a splinter bid. Maybe 2

is the right call, but I thought that might make it easy for the opponents to eventually find the killing opening lead. So, I withheld any information about my hand and instead asked about partner's. I bid 2NT, Jacoby. Partner bid 3

, which meant he had no voids or singletons, but not a dead minimum hand (with a minimum, he'd have signed off in 4

Slam was still in the picture, so I made a control-bid of 3

. LHO doubled for the lead, and this was passed back to me. At this point, I redoubled. A redouble of such a control-bid should promise specifically first-round control (an ace or a void). After my redouble, partner bid four diamonds showing a control there.

I decided he had shown enough slam interest that it was time for Blackwood. He responded to show 3 keycards. This meant he had the A

) meant that along with his trump queen, he had NO side kings at all. What did this all mean and what should I bid?

Partner has no singletons or voids and you know a spade lead is coming. Picture the play. He will be able to ruff some diamonds in dummy and he will be able to draw trump, but then what? He will need to take a club finesse. If it loses, he won't make even a small slam [the opponents will cash their spade trick(s)]. What if the club finesse wins? In that case, partner will probably take all 13 tricks.

and this was the full deal:

After the expected spade lead (or any other lead), there was nothing to the play. With the club finesse onside (thank you!), my partner took an easy 13 tricks for 2210. Had the club finesse lost, we'd have been down 200. Yes, 6

would be down only 100 in that case, but surely the risk/reward for being in seven was well worth the gamble.

We had two other fun deals at the same tournament. First, I had a hand with 8-5 distribution. As soon as I picked up this hand, I had a flashback:

The last time I held 8-5 distribution was 25 years ago and it was maybe the most famous deal of my life. Anyone who wishes to play that deal can do so on my website (download the free demo of "My Favorite 52"--that infamous deal is appropriately, "Deal #1"). With my modern-day 8-5, in Mexico, there was lots of excitement. My partner, Steve Weinstein, opened 1

! With both vulnerable, I responded 2

, game forcing. I figured the opponents might get in our way, and sure enough, LHO entered with 2

, doubled (for penalty) by my partner. RHO passed, and it was up to me.

Surely, I wasn't sitting for this one. I really wanted to know about the minor-suit aces, but there was no bid to ask for them. (Some advanced readers will be aware of an animal called "Exclusion Blackwood" -- whereby you can jump, to say, 5

, to ask for aces outside of hearts. Here, that wouldn't help--I needed "double-exclusion!")

Anyway, I bided my team by raising to 3

, presumably showing some heart values. Not much help there. I continued my stalling process by bidding 4

. This was getting me nowhere. I had no idea if he held the right cards for me, so I just guessed to bid 6

, doubled by LHO. This was passed back to me. I considered running to 6

, or redoubling, but eventually passed and awaited the opening lead.

The opening lead was the A

, which I ruffed. How would you play the clubs? The penalty double was probably based on two aces, not on queen-third of clubs and an ace. A player with such a trump holding would do anything but double, for fear of giving away the trump position. So, if anyone had queen-third of clubs, I thought it would be RHO. I led the J

(you never know when somebody might cover) and LHO showed out. What is the plan after winning dummy's A

? Before finessing East out of his Q

, you had better use dummy's top hearts. Hearts will not break 8-1--this is a safe play. On the high hearts you throw your little diamonds and take a club finesse and claim for 1540. This was the full deal:

As you can see, West chose the wrong opening lead. If he starts with the

A and gives his partner a ruff, he beats the contract. At the other table, South drove to 6

Here is one last strange deal from Mexico, and a chance to win more than 17 IMPs. In a knockout match, with both vulnerable, try having a truly enjoyable bridge experience:

What would you bid as dealer? You should open 1

(to avoid reversing), but this is not proper bidding. You should start with your longer suit and judge later whether or not (and how) to get spades into the picture.

opening is doubled and your partner raises to 2

There is no "correct" answer, but I think a jump to 4

is best. This contract rates to have play, so there is no reason to dilly-dally and risk having the opponents get together in a minor-suit contract. Four hearts is passed back to RHO who surprises you by bidding 4

I know some people think this way: "The opponents have lots of spades, my partner is short in spades, therefore I can ruff spades in dummy and do very well in hearts." Bad thinking. You won't be able to ruff all of those spades, and meanwhile, those spades will be great on defense. Another way to think of it is to use the LAW of Total Tricks (so glad I thought of mentioning it.) Even if partner is void in spades, they have only 8 trumps. Your side probably has 9 trumps, a total of 17, indicating 17 tricks. If you were to bid on to five hearts, contracting for 11 tricks, that means the opponents would have only 6 tricks their way. With both sides vulnerable, why try for 650 when you might have 1100? So, you should double 4

(as I did at the table). Everyone passes and it's your lead.

With long trumps, your plan should not be to get ruffs. Instead, you should try to shorten declarer's trumps. Accordingly, you lay down the heart ace and see what should be a disappointing dummy for the declarer. I'm an aggressive takeout doubler, but I think this North hand is marginal (change the

A you continue the heart attack and declarer follows with the queen. He plays the

10 off dummy and your partner follows. This is a pleasant development. You know that you have more trumps than declarer. Declarer plays low and it is up to you.

There is no reason to withhold your

Q. Declarer won't finesse again because your partner is showing out on the next round. So, you take your queen and now what?

You shouldn't play more hearts yet. Declarer will ruff in dummy--you'd be giving him a free trick. You already have control, and the best way to extract the maximum penalty is to return a trump. Your partner throws an encouraging club and declarer groans in agony. (At the table, his exact words were, "this could be expensive"). How expensive?

If you mentally review the first four tricks (heart ace, heart, spade queen, spade), you should come to a gratifying conclusion. Declarer started with the heart queen and the spade ace-king-jack. From the auction, you know your partner has the club ace. What can declarer do now? If he draws trump, your side will have the rest. If he plays a diamond, you will win the ace and play a third round of trumps. Dummy will be out of trump. You will have the long trumps and running hearts. All declarer will get is his 3 high trumps. On the Real Deal, declarer played a club at trick five to partner's ace. This was the remaining position:

I didn't want a club ruff. I didn't want partner to play a heart (allowing dummy to ruff). I was greedy. I knew if partner played a diamond, I could win and play a trump. Declarer would get only his trump ace-king--I had control. "Think partner--think!" As he was thinking, I knew if he played a diamond, I would have a defensive claim. Partner, bless him, worked it out. He played a diamond and I showed my cards. "Playing a spade, down six," I said. (This was the top knockout bracket--and the opponents were good enough players to quickly see and accept the claim).

Plus 1,700 gave us an 18-imp gain because the player with my hand at the other able made a surprising error. A man with 8,000 masterpoints incorrectly opened one spade. What happened next? Pass-Pass-Pass, down two, -200. I suppose it was good for him that his disaster [he can make 620 in 4

(unless there is an unlikely trump lead)] came on the same board that his teammates went for 1,700. Still, one cannot afford too many such adventures.