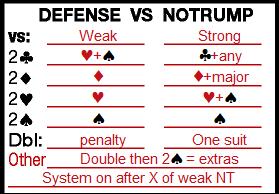 LC Standard uses DONT against a Strong Notrump, but different methods against a weak notrump (discussed further down).

Everything written here (whether against strong or weak) is played the same way in balancing seat as in direct seat (life's tough enough as it is).

A full description of DONT is here.  Make sure to discuss the partnership style, and of course the follow-ups.

For my intermediate (and lower) readers, I suggest you don't spend too much time on this. Very few of your opponents will be using a weak notrump. You'll be studying/memorizing something that "never" comes up. This defense to a weak notrump (especially dealing with doubles) does involve work and memorization. If you fear mixing it up with your Strong Notrump defense, then why even go here?

Against a weak notrump, LC STANDARD uses double as "penalty."  This means roughly 13+ -- any shape (if vulnerable, it will be a decent 13+). After the double, the partner of the doubler plays "Systems on" -- as if our side opened 1NT.  For example:

Just think of the double of a weak notrump as meaning "I opened 1NT to show 13+" -- and proceed accordingly. So, in the examples above, "Advancer's" call means what it would mean had partner opened 1NT.  In the first example, since our side (overcaller) doubled a weak notrump, we pretend he opened 1NT (15-17). Their next player passed, so the 2

"overcall" and our negative double (same system we play if our side had opened 1NT and received interference).  Of course, the partner of the doubler shouldn't assume 15-17; he should assume 13+ and base his game-bidding decisions accordingly.

Advancer will typically leave the double in if he has a decent hand and try to collect a penalty.

Once it goes (1NT)  Dbl (P)  P, they have been doubled for penalty, so all subsequent doubles are for penalty.

The other bids (as marked on the convention card at the top of this article) against their weak notrump are "constructive." We don't interfere on garbage. On the other hand, these bids (below) are usually not made with a very strong hand (no double). So, these overcalls are roughly 11-16 in playing strength.

=equal length in the majors, 2N=asking/game interest (and the partnership would need to discuss the follow-ups).

Note: This is a very simple, easy-to-remember method versus weak notrump.  For players who are competing at a high level, facing a lot of weak notrumps, I suggest something a bit fancier. For an upgrade, click here.

Note: I am fully aware that this is only an outline. Professional partnerships need to do much more work. My suggestion, however, for 99.9% of players would be to just "wing it." In other words, agree on what's written here and just hope for the best at the table.

For a full LC Standard Convention card and a prettier version of this series, see Bridge Winners.