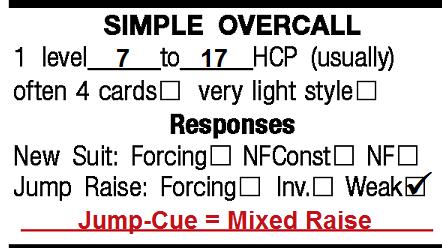 "Simple" overcall means a non-jump overcall. The range shown is approximate and vulnerability- and level-dependent. When vulnerable, and especially on the 2-level or higher, the minimum range is higher. On the 1-level, white against red, I can see sticking in an overcall with AQ1098 of a suit and nothing else. On the 2-level, my overcall would tend to contain opening bid values and a decent suit. It is a common error to overcall the opponent's 1

The upper range for a simple overcall is approximately 17. With more than 17, we will start with a double and then bid again.

I am not a fan of 4-card overcalls (they mess up partner's Law of Total Tricks usage--it makes it hard for him to judge competitive auctions). Still, there are exceptions. A great 4-card suit (AKJ9) when there is no other alternative, is possible.

After the overcall, there are many ways to go. It's hard to mark my suggested simple method by checking a box. After we overcall, a change of suit on the 1-level is natural and NF. Example:

A change of suit on the 2+level is forcing one round. Example:

So, if you want to force in a new suit, you must bid it at the 2-level or higher.  Some examples of what is forcing and what isn't should make the LC Standard treatment easy to see:

.  (Not pretty, I know, but this situation won't come up much and it makes the rest of the framework easy to use).

to show hearts, invitational+  (no need to show spades).

As usual with LC Standard, this isn't necessarily the 100% perfect set of agreements, but it is 90% effective and very easy to memorize. Whether or not you agree with the theory is not important. There are pros and cons to any method. Best is "transfer-advances" but they cause a headache. Also, as usual, please send any complex alternatives to my Antarctica office. Speaking of which, here is something that might be considered complex (part of LC Standard), but doesn't involve any risk of forgetting:

Jump Cue = Mixed RaiseA fun tool which I recommend as part of LC Standard is to use a jump-cue as a mixed raise. "Mixed" means 4-card support with more than a preemptive raise, but less than limit. The jump-cue means that you cue-bid their suit by jumping. Example: (1

-(Dbl)-??   This jump-cue is often forgotten by inexperienced players, but not fatal (the overcaller will not think this is a natural bid.)  The big forget comes in failing to make the bid.

Summary of what our bids mean after we overcall: New suits on 2+ level are forcing. New suits on 1 level are NF. Cue-bid guarantees support (invitational or better).  A jump raise, of course, is weak. A jump-cue is a mixed raise (if remembered).

For a full LC Standard card and a prettier version of this series, see Bridge Winners.

What Should we Play?