After more than a year on the sidelines (I guess it was only a "semi" retirement--not to be confused with a semi-forcing notrump), I was lured back into playing bridge.

Every four years the World Championships are "open" (meaning anyone can enter).  The other three years the only way to compete for a world team title is to win the U.S. Team Trials. In 2010 the Open event was held in Philadelphia and a long-time friend called me up about playing. 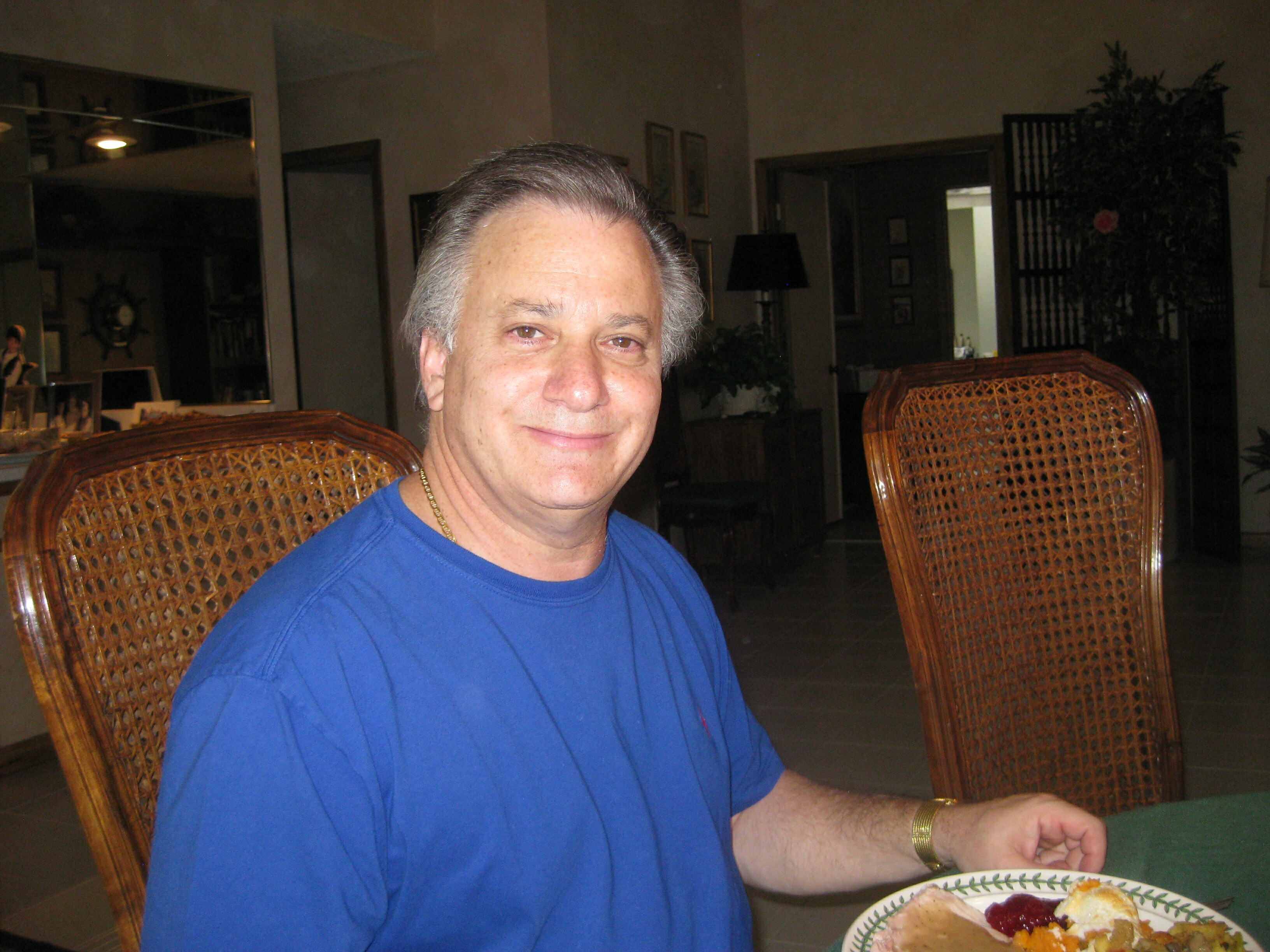 Jeff Wolfson at Thanksgiving, 2010Jeff Wolfson vowed to put together a team (not easy--because all the top pro pairs are usually already committed to other obligations).  We ended up with a new American pair (Rosenberg-Willenken) and a young Israeli pair (Ginossar-Pachtman).

Not expecting much, we made it through the Round Robin and then won our Round of 64 match against Belgium. In the Round of 32 we faced the top South African team (who defeated the vaunted Italians in the 2007 Bermuda Bowl). We won again to reach the Round of 16.  We had to face two of the world's top 10 pairs (Lauria-Versace and Balici-Zmudzinski)--but managed to play the role of Cinderella with an upset victory.

In the Round of 8, we defeated the reigning U.S. Champions including Levin-Weinstein.

In the semifinals we lost a heart-breaker by 4 IMPs to NICKELL (featuring Zia-Hamman and Meckstroth-Rodwell). For me, it was quite a return to big-time bridge.  Almost a world championship victory.

As is my way, I focus on the negative and where we could have improved. Although my new partnership with Jeff Wolfson proved effective, there were two large blemishes. My main philosophy is "avoid accidents." In filling out our system, we kept it very simple -- with the focus on getting the basics right, but not having disasters.

Here are the two disasters, one of which may have cost us a world championship.

From our semi-final loss:

As South, Zia opened 1NT (supposedly 15-17). As West, I probably should have passed, but launched one of our few conventions. I overcalled 2

to show a two-suiter with clubs and another suit. In itself, this was not immediately fatal.

When you play any convention (in this case "DONT") you must discuss all follow-ups. Jeff wanted to show that he didn't care about my other suit. He just wanted to play in diamonds. How does he say this?

Is a diamond bid now "pass or correct?" Is it "my own diamonds?" We had some discussion, but not of a JUMP. Jeff leapt to 3

Our prior discussion was conflicting. Did the fact that Jeff was a passed hand change things? Anyway, he meant it one way (diamonds) and I took it the other way (pass/correct). I pulled to 3

and the doubling started. We ended in 4

X. I was sick when I put down the dummy, but delighted that it cost only 500. If North-South can make a game (they can), the loss would be small (500 against, say, 420). However, our teammates reached the unlucky 4

are makable). Our team lost a large swing; painful in a match we lost by only 4 IMPs. This is an example of using a convention but not discussing all the follow-ups thoroughly enough--one of my pet peeves. We'll try not to let it happen again.

The other accident came in the playoff for the bronze medal.

2
Jeff held this hand and the auction began as shown. One diamond was alerted as artificial and "showing hearts" (a common treatment these days). We hadn't thoroughly prepared for this. Thinking this was a good hand for a Michaels bid, Jeff tried 2

Because they were in effect bidding 1

was artificial. We had actually (briefly) discussed that this bid is NATURAL in our partnership (after an actual 1

response), but it isn't always easy to remember. We hadn't discussed it after a 1

-showing-hearts bid. Unfortunately, I took this bid as HEARTS, while Jeff obviously meant it as Michaels. Another accident ensued, this time leading to -500 on a partscore deal.

Will this drive me back into retirement? I am playing a bit in Orlando (November-December, 2010) and then will wait and see. If Jeff and I do play again, you can be sure we will work on "accident prevention" -- not on adding more conventions!